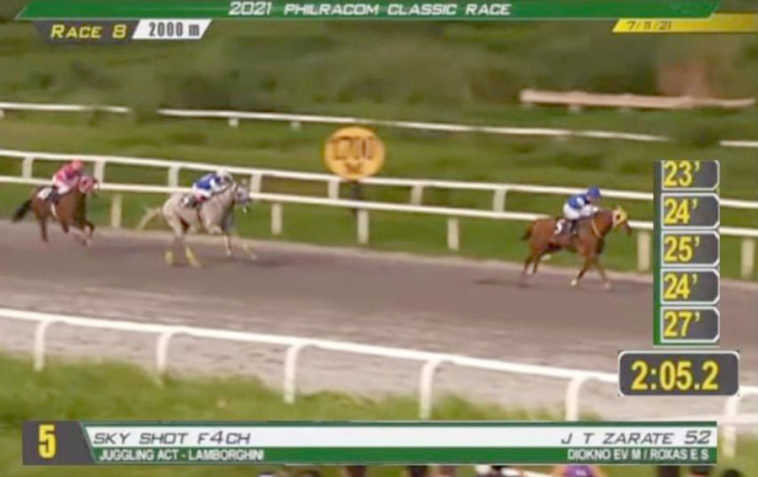 Sky Shot steadily pulled away from the field after a nice start to win the 2000-meter distance race pulling away.

Diokso said part of the prize money will be donated to Mayor Gerry  Natanauan  of Talisay, Batangas to help those affected by the eruption of Taal Volcano.

Woman Grandmaster Janelle Mae Frayna and International Masters Daniel Quizon, Michael Concio, Jr. and Paulo Bersamina suffered stinging defeats that pushed them on the brink of elimination at the start of the Chess World Cup in Sochi, Russia Monday night.

Frayna blew away a drawing chance and fell to Hungarian Hoang Tranh Trang in 49 moves of a Queen’s Pawn duel that spoiled her debut.

Quizon, for his part, absorbed a 53-move defeat at the hands of Canada’s Evgeny Bareev in 33 moves of a Slav Defense while Concio succumbed to India’s Chitambaram Aravindh in 33 moves of an English Opening.

Bersamina got a whipping at the hands of 15-year-old Indian GM Rameshbabu Praggnanandhaa in 48 moves of a Sicilian duel. (Kristel Satumbaga)

Famed Benguet stable Team Lakay has welcomed actor Baron Geisler to its camp for a friendly training and sparring session.

Team Lakay posted photos and videos on its Facebook page on Monday, July 12, which shows Geisler sparring with no less than coach Mark Sangiao.

“He (Geisler) was here ata ngayong weekend for a project and he came to have a friendly spar with us,” Sangiao told Manila Bulletin-Tempo in a text message. “We heard lang that he really wants to train with us.