A total of 116 cyclists – 98 men and 13 women – will pedal on the roads of the Clark Freeport and Special Economic Zone in Pampanga this weekend for the PhilCycling National Trials for Road which feature races in individual time trial (ITT), criterium and massed start.

Day 1 on Saturday of the trials presented by Standard Insurance, Smart, MVP Sports Foundation, Bases Conversion Development Authority headed by Secretary Vince Dizon and the Clark Development Corp. led by Retired Brig. Gen. Manuel Gaerlan will see 13 women racing against the clock starting at 8 a.m. over a distance of 17.1 kms.

Half an hour later, 54 men will vie in their own ITT over the complete 24.6-km loop which will also be the battleground for the road races set for Day 2 on Sunday.

The Saturday afternoon criterium will see the same set of riders competing around the 2.3-km perimeter of the Clark Parade Grounds. The women’s race consists of 16 laps and the men’s contest 20 laps with three and four intermediate sprints, respectively, awarding 5, 3, 2, 1 points – doubled in the final lap – to the top four riders.

“We will be witnessing competitive cycling right on Day 1 of the Trials and with the road races set for Sunday, this event is one compact competition,” Philippine Olympic Committee (POC) and PhilCycling President Rep. Abraham Bambol Tolentino said.

The races will be staged under a bubble environment as prescribed by the Central Luzon Regional Task Force, Office of Civil Defense, Department of Health, Philippine National Police, Province of Pampanga and the Department of Tourism.

All participants have to undergo RT-PCR and Antigen testing and fans will not be allowed in the bubble staging area at the venue. 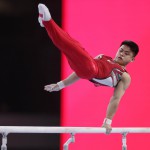