The young Gilas Pilipinas squad will finally get a chance to finally know what kind of a basketball power host Serbia early tomorrow morning (Manila time) in the FIBA Olympic Qualifying Tournament in Belgrade.

Gilas is a major underdog going into the Olympic qualifying opener against the Serbian team that will come in with talented players mostly from the European leagues despite the absence of NBA Most Valuable Player Nikola Jokic.

Both teams square off at 2:15 a.m. in Manila which is seven hours ahead of Serbia, which means that diehard Gilas fans and scribes covering remotely will either have to wake-up early or sleep late in order to see the game on television or streaming platforms in what many believe as the biblical showdown between “David and Goliath.”

Coach Tab Baldwin comes into the game hoping to see his players with an average age of 22 with the goal of not only putting up a competitive showing but also to learn a thing or two from their Serbian counterparts.

But Gilas is dealing with some injuries going into the OQT, particularly Dwight Ramos whose condition remains doubtful due to a groin injury sustained after his standout showing in the FIBA Asia Cup Qualifiers in Pampanga.

Naturalized player Ange Kouame is also dealing with a bruised knee while it remains to be seen if Carl Tamayo’s ankle will improve enough for him to get some playing time.

“We’re banged up. There’s no question we came out in the third window limping,” said Baldwin.

Several players who impressed during the continental qualifiers will get themselves tested against the likes of NBA players Boban Marjanovic and Nemanja Blejica and European league MVPs Vasilije Micic, Milos Teodosic and Filip Petrusev.

One is how SJ Belangel and RJ Abarrientos will be able to hold their own against Teodosic, a veteran of the Olympic Games and FIBA tournaments who also had a stint with the Los Angeles Clippers in the NBA.

There’s also the intriguing question of 7-foot-3 Kai Sotto’s matchup against the Serbian bigs as he gets to face competition stiff from the ones he saw in the Asia Cup Qualifiers.

“How do I see them without Bogdan and Jokic? I see them world class, I see them elite,” said Baldwin, also referring to the absence of Bogdan Bogdanovic who is currently in the midst of the Atlanta Hawks’ run in the NBA Playoffs.

“I would think Serbia right now, arguably is in the top three teams in the world. Obviously if they had Jokic and Bogdanovic, that would probably cement that thinking. But this is a country that continuously produces great players, great teams, and as importantly, maybe the best coaches in the world.

Serbia debuted at presstime against Dominican Republic as it seeks a strong start to its quest to claim the only Olympic berth in the Belgrade OQT. 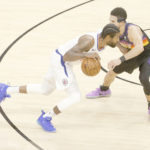