Two more Filipino-foreigner athletes qualified to the Tokyo Olympics – thanks to Universality and Continental Quota schemes.

Filipina-American Kristina Knott became the second athlete from athletics to earn a Tokyo ticket while Fil-Japanese Kiyomi Watanabe was the first from judo.

According to worldathletics.org, Knott earned a berth through universality in the women’s 200 meters while Watanabe got the ticket in the women’s half-middleweight (63kg) through Continental Quota based from the International Judo Federation website.

The country now has 15 athletes qualified to the Games, already exceeding the previous delegation of 13 at the 2016 Rio Olympics.

Knott won two gold medals in the 2019 Southeast Asian Games including in the women’s 200m where she posted a national and SEAG record of 23.01 seconds.

Her personal best is close to the Olympic entry standard of 22.80sec. Her current season best is at 23.17sec she made at a race in Baton Rouge, Louisiana last April.

Meanwhile, two Continental Quotas were given in Asia in Watanabe’s weight class with the other slot being given to Uzbekistan’s Farangiz Khojieva.

So far, there are 18 qualifiers in Watanabe’s division based on the world rankings list and seven Continental Quotas.

A silver medal winner in the 2018 Jakarta Asian Games, Watanabe is currently ranked No. 41 in her division. 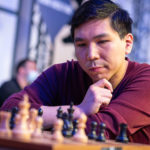