Gilas Pilipinas recovered from an awful first half show to beat Indonesia, 76-51, Friday and stay unbeaten in Group A of the FIBA Asia Cup Qualifiers at the Angeles University Foundation Sports and Cultural Center.

The Nationals were in command throughout the contest but had to deal with sluggish play on both ends in the first two quarters before picking things up in the second half to register their fifth win in as many games in the continental qualifiers.

Justine Baltazar’s two triples in the third sparked as Gilas pullaway and he finished with 11 points and nine rebounds while guard Dwight Ramos had an all-around showing for 10 points, 12 rebounds and three steals.

Carl Tamayo also buried back-to-back triples in the fourth before he exited after a hurting his left knee on a rebound play against Arki Wisnu.

The win was a fitting sequel to Gilas 100-70 trouncing of the Indons the first time they clashed in February last year in Jakarta.

More importantly, the win gave them the extra zest when they play the South Koreans again on Sunday.

It was a total team effort as Ange Kouame also scored 11 points and grabbed five rebounds. 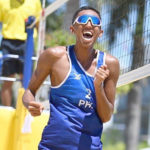