Angelo Kouame will play as the naturalized player of Gilas Pilipinas for the FIBA Asia Cup qualifiers Window 3 after the basketball body approved his registration following his acquisition of a Philippine passport last week.

The decision came a few days before the start of the ‘bubble’ tournament scheduled June 16 to 20 on Clark, Pampanga.

“This decision is consistent with the whole program because it’s a vision to the future,” said Gilas Pilipinas men’s team Program Director Tab Baldwin as Kouame began joining the national team last year.

Baldwin added: “We’ll try to accomplish short-term goals while we’re really focusing on our long-term objective of forming a Gilas team that can genuinely compete with top 10 teams in the world come 2023.”

It was only last month when the naturalization of Kouame, who hails from Ivory Coast, was approved by President Rodrigo Duterte.

The 6-foot-10 Kouema is the third naturalized player to play under the Gilas program after Marcus Douthit and Andray Blatche donned the national team colors in the past 10 years.

Douthit played from 2011 to 204, while Blatche was part of the national team starting in the 2014 FIBA World Cup in Spain and up to the 2019 FIBA World Cup held in China.

Although he has to make his debut with Gilas, Baldwin said there are teams – like the Milwaukee Bucks – that are watching his progress.

“While we know that Ange is not at that level now we also know that the Milwaukee Bucks have scouts watching him. We know the potential is there but potential takes time to evolve and be realized with a lot of hard work and Ange has never been afraid of putting in that hard work,” Baldwin said.

“It is a bit of a gamble because instead of buying the real thing, we believe that we can develop it over time and, given the other talent we have available in the youth ranks right now.”

“We think Ange fits well with them and we think that the chemistry they will develop over the years will pay dividends down the road although it may also lead to some difficult periods in the short term. This is a kid that has tremendous potential and he was desperate to become a Filipino,” he added.

Gilas will play three games in the qualifiers.

The national team will face off against South Korea on June 16, Indonesia on June 18, and South Korea again on June 20. Kouame will be tested early as he will be matched up against naturalized players in Ricardo Ratliffe (Korea) and Lester Prosper (Indonesia).

“We are advancing too quickly with him,” said Baldwin. “We’re putting him into the firing line early. But the other side of that is it’s going to pay dividends later on, and he’s going to learn a lot from these experiences.”

Samahang Basketbol ng Pilipunbas President Al Panlilio said that it’s a welcome development, as the federation remains thankful to everyone who worked hard to make it possible.

“We thank our allies from the Bureau of Immigration, the Department of Foreign Affairs, House of Representatives, Senate, and Office of the President as it was their swift action that led to this important step in our program,” said Panlilio. 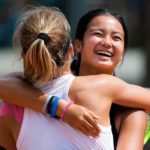