Louie Sangalang has reached the finish line of his “The Apprentice” stint but failed to get the coveted job offer to work with ONE Championship and CEO Chatri Sityodtong.
Out of the original 16 candidates, Sangalang was a proud runbner-up with Venezuelan Jessica Ramella being chosen as “The ONE” by Sityodtong.
The 43-year-old Sangalang showed a promising run in the hit reality television series, with a couple of highlights in physical challenges as well as displaying leadership roles in business tasks.
Sityodtong admired both candidates’ genuineness as they survived two months of grueling challenges and described the finalists with different specialties in traits.
For the ONE honcho, Sangalang was a “silent assassin, strategic, and an outstanding leader” while Ramella was “creative, a hustler, and likable.”
The decision all boiled down during their “toughest job interview of their lives,” where Sangalang and Ramella were put in the hot seat by Sityodtong and Grab Group CEO and co-founder Anthony Tan.

Niharika Singh, Sityodtong’s right-hand woman and co-advisor, also helped the two uncover their strength and weaknesses in pre-interviews sessions. Sangalang expressed his desire for martial arts to unleash greatness once more while Ramella said she was ready to become the chief of staff after an “incredible journey. “Sityodtong came down to a decision to appoint Ramella as “The One” and his prized “Apprentice.”
Earlier, Sangalang and Ramella both finished their final physical task of training like an Evolve athlete — switching in between resistance-band sprints, mitt work, medicine ball sit-ups, battle ropes swings, and stair runs with sandbags. 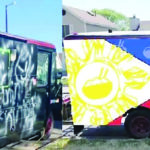