DENVER, CO - JANUARY 31: Nikola Jokic #15 of the Denver Nuggets reaches for the ball during the game against the Utah Jazz on January 31, 2021 at the Ball Arena in Denver, Colorado. NOTE TO USER: User expressly acknowledges and agrees that, by downloading and/or using this Photograph, user is consenting to the terms and conditions of the Getty Images License Agreement. Mandatory Copyright Notice: Copyright 2021 NBAE Garrett Ellwood/NBAE via Getty Images/AFP

BELGRADE, Serbia – Nikola Jokic is not your usual NBA Most Valuable Player – slightly doughy, not the quickest, media-shy and he rarely dunks.

His playing style is typical of the game developed in the former Yugoslavia described as “jazz basketball” – a style that relies on improvisation and individual creativity rather than speed and sheer power.

And the 26-year-old Nuggets superstar is also typical in another way: his calm, modest personality reflecting his background in rural northern Serbia.

The down-to-earth persona helped to bring him legendary status among Serbian fans long before the extraordinary season that earned him the MVP award.

“He seems like the guy we all know,” Stefan Gojkovic, a 31-year-old Belgrade native, told AFP.

“The one who fools around on the local basketball pitch before grabbing a beer with his friends afterwards.”

In his native Sombor, a sleepy northern city where 6ft 11ins (2.11m) Jokic returns each year, he prefers to keep a low profile, spending his time with his family and indulging his other passion: horses.

“He inherited this from me,” his father Branislav Jokic, 61, a retired agricultural engineer, told AFP in 2019.

“As a child, he would clean the stables before going to school.”

He has married his high school sweetheart and will often stop by his former school to talk to young players on a small court, beneath his mural.

“When he comes to Sombor, you can see him on the street and he’ll always have time for a chat,” he added.

As a heavier kid “he had problems with PE lessons… he really struggled”, she told AFP.

“But he fought — and succeeded, as we can see.”

Jokic himself has admitted he could not hold the abdominal plank position for more than 20 seconds when he first came to the NBA, but was drilled by trainers into shedding some pounds, while still maintaining a bulkier physique.

According to his father, basketball was love at first sight.

“As a child, with his dummy in his mouth, he would watch his brothers play (basketball) without moving, without making a sound, sitting on my lap,” said Branislav Jokic.

Even though he entered the NBA circus as 41st pick in the second round – almost the equivalent of Denver finding a golden nugget while strolling in their backyard – the center immediately entranced fans and sports analysts.

Jokic keeps things simple on the pitch, combining light movement and simple tap-ins with uncanny precision, especially laser-sharp passes that have seen him likened to an NFL quarterback on court.

His style stands out in the entertainment-focused NBA, but is typical for Serbian basketball.

Aleksandar Miletic, a local sports journalist, once described it as “jazz basketball”.

It is “organized improvisation… letting a player out of the collective without harming the team”, he explained.

Former San Antonio Spurs forward Zarko Paspalj, one of the first Europeans to venture in the NBA, believes Jokic is an “old-school example of Yugoslav basketball”.

“Here, boys are taught to be modest. Jokic carries his upbringing proudly, and presents that image, while being an amazing player,” Paspalj told AFP. 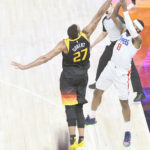