Philippine Azkals team manager Dan Palami remains confident that the national squad will be able to withstand all challenges going into the resumption of World Cup/Asian Cup Qualifiers this week.

Palami believes the Azkals can display the usual fire and passion they have shown in the past even after 9 players opted out of the Doha training camp and the Asian Qualifiers for various reasons.

“It’s been a challenging task to assemble players,” Palami admitted in a video posted by the Azkals’ social media team. “We have 20 players who will participate in this phase of the competition and hopefully we can get through. But yes, a lot of things have happened.”

Among the players who won’t be seeing action is veteran goalkeeper Neil Etheridge, who is set to undergo surgery after his first season with English second-tier side Birmingham City.

Etheridge was supposed to don the Azkals kit for the first time since Oct. 2019 when his performance behind the stick forced fancied China to a scoreless draw in Bacolod City.

Coach Scott Cooper also called up Justin Baas, Kenshiro Daniels, Mike Ott and Quincy Kammeraad to fill up some of the vacated spots.

“We’ll have to make due,” said Palami. “I mean, like every Philippine team, lumalaban kahit dehado. But we’re here to fight for the country.” 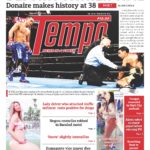