Coach Chot Reyes believes there’s still plenty of work to be done before the TNT Tropang Giga can put themselves in the radar as among the top contenders in the PBA’s 46th season.

“The way we’re looking at this point, to be completely candid, is I think we’re far from being really competitive not because of a lack of talent — I think we have a lot of talent — but just the preparation and knowing each other,” Reyes said in a recent interview with ESPN’s SportsCenter Asia.

Reyes’ return to the coaching ranks has raised expectations that TNT could give corporate rivals Barangay Ginebra, San Miguel and Magnolia a run for their money once the season gets underway.

But Reyes said developing chemistry and getting the system run to near-perfection are something TNT is currently in its ongoing training bubble in Laoag, Ilocos Norte.

“I’m a new coach coming in and we have four or five new players as well, and then it’s gonna be an entirely new system,” said Reyes, who actually did the virtual interview at Laoag’s Centennial Arena.

The Tropang Giga are training in Laoag until May 31 before heading back to Manila where they hope that community quarantine guidelines will be relaxed in order for them to resume full practices and scrimmages.

TNT goes into the season not only with Reyes back at the helm, but with new players like rookie Mikey Williams, Glenn Khobuntin and Dave Marcelo while Kelly Williams is returning after a brief retirement.

Jayson Castro, RR Pogoy and Troy Rosario are also part of the camp as TNT aims to build on its runner-up finish in last year’s PBA Philippine Cup bubble despite Ray Parks Jr. opting out to play the upcoming season amid contract negotiations that stalled several months ago. 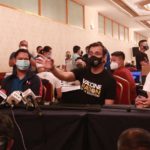