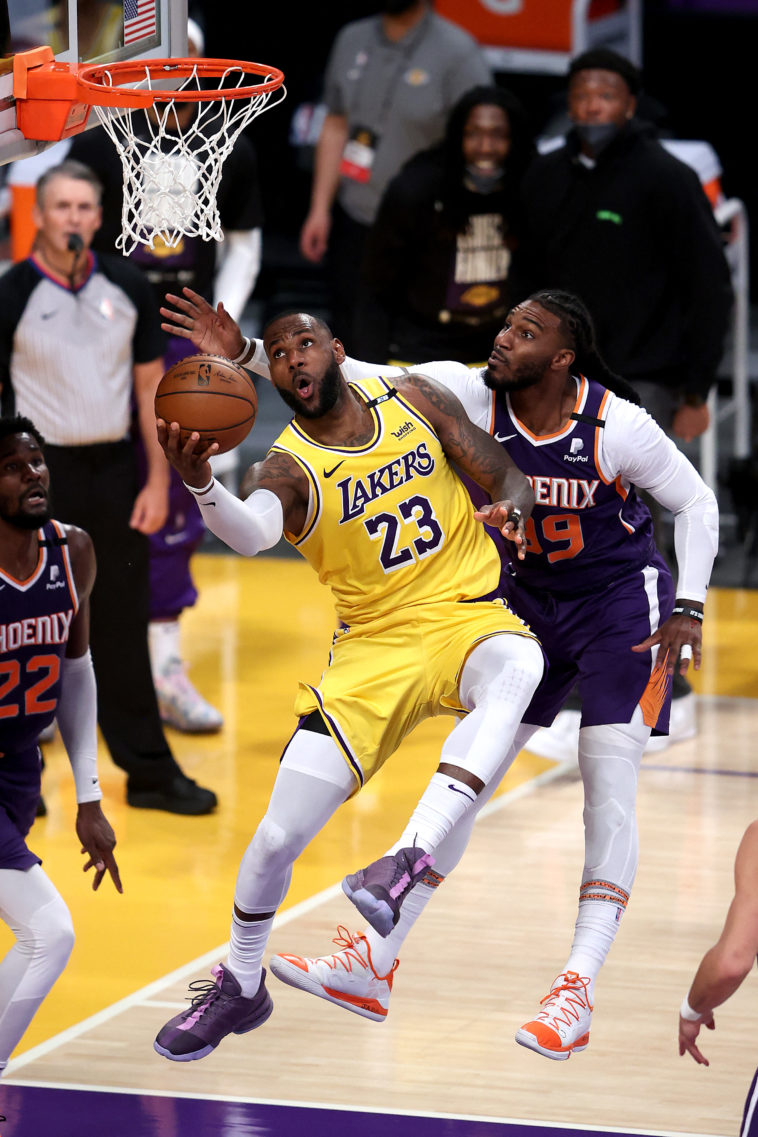 LOS ANGELES, CALIFORNIA - MAY 27: LeBron James #23 of the Los Angeles Lakers makes a layup past the defense of Jae Crowder #99 of the Phoenix Suns during the second half of Game Three of the Western Conference first-round playoff series at Staples Center on May 27, 2021 in Los Angeles, California. NOTE TO USER: User expressly acknowledges and agrees that, by downloading and or using this photograph, User is consenting to the terms and conditions of the Getty Images License Agreement. Sean M. Haffey/Getty Images/AFP (Photo by Sean M. Haffey / GETTY IMAGES NORTH AMERICA / Getty Images via AFP)

Davis is looking like his old self again and James’ balky knee isn’t the biggest injury story of the series anymore as the Lakers grabbed a 2-1 series lead in the opening round of the playoffs.

Dennis Schroder finished with 20 points and four assists for the Lakers, who hosted a playoff game for the first time since 2013 at Staples Center.

“It’s a beautiful thing,” James said of the pandemic-limited 7,800 fans in attendance. “It was a special night, and we just tried to reward our fans for the loyalty they have for us, and just try to play the game the right way.”

The game got physical in the final moments as Suns star Devin Booker was ejected for pushing Schroder on a drive to the basket with 35 seconds left.

Officials then ejected the Suns’ Jae Crowder for arguing with Schroder.

After the game Davis called Booker a “dirty” player.

“That’s a dirty play,” said Davis. “Dennis could have got really hurt like that… That can’t happen. Hard fouls we accept… but to blatantly push a guy with two hands out of the air, that’s a scary play.”

Davis stepped up his play after a poor shooting performance in game one that saw him score just 13 points.

“Game one was on me. I decided to come out more aggressive,” Davis said.

The Suns don’t have an answer for stopping Davis or James, who is playing on a sore ankle.

It was going to be a tall order to beat the defending NBA champions without Paul at full strength.

He was limited to just 27 minutes Thursday and scored just seven points.

Elsewhere, Giannis Antetokounmpo finished with 17 points and 17 rebounds as the Milwaukee Bucks grabbed a 3-0 stranglehold lead in their first-round playoff series with a 113-84 thrashing of the Miami Heat.

Two-time NBA Most Valuable Player Antetokounmpo and Khris Middleton have carried the offensive load for the Bucks in the series, but Thursday they also got plenty of help from their supporting cast as six Milwaukee players finished in double figures.

Middleton scored 22 points, Jrue Holiday had 19 points and 12 assists, and Brook Lopez chipped in 13 points for the Bucks.

Milwaukee are on the verge of sweeping the Heat, who reached the NBA Finals last season.

“I’m not surprised that we’re able to win a game because once we focus on ourselves, play together, have fun and be tough, good things are going to happen. And in these three games, good things have happened for us,” Antetokounmpo said.

Milwaukee can wrap up the best-of-seven series with a win in game four on Saturday in Miami.

One of the biggest differences in the Eastern Conference series is the top players on the Bucks have consistently outplayed Miami’s key duo of Bam Adebayo and Jimmy Butler.

Butler finished with 19 points and Adebayo had 17 for the Heat, who have lost by an average of more than 30 points over the last two games.

Milwaukee seems determined to erase the memory of being beaten by the Heat in two previous playoff meetings in 2013 and last year.

Also, Nikola Jokic had 36 points, Austin Rivers scored 16 of his 21 points in the fourth quarter and the Denver Nuggets beat the Portland Trail Blazers 120-115 to take a 2-1 series lead. 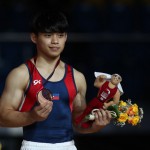 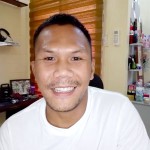