Alex Eala was foiled in her singles bid but triumphed in the doubles where she and Russian partner Oksana Selekhmeteva advanced to the semis of the W25 Platja D’Aro tournament in Spain Thursday, May 20.

Eala yielded to Spaniard Irene Burillo Escorihuela, 6-2, 6-4, in the second round that lasted 1 hour and 40 minutes before teaming up with Selekhmeteva a few hours later to stun top seed Russians Vlada Koval and Sofya Lansere, 6-3, 2-6, 12-10.

This marked the first time that Eala took part in the doubles in a young pro career.

Eala and Selekhmeteva are coming off a 6-2, 6-0 first-round thumping of Spain’s Valeria Koussenkova and South Africa’s Warona Mdlulwa in the 16-pair draw.

The Filipino-Russian pair struggled to keep their momentum after a commanding opening set by trailing Koval and Lansere 5-0 and losing the second frame.

Eala and Selekhemeteva regained their composure in the third despite stiff resistance from their Russian rivals, keeping control of their 6-3 lead en route to the match win.

The feat set up Eala and Selekhmeteva a semis meeting with unseeded Dutch pair Isabelle Haverlag and Suzan Lamens, who also pulled off a 6-2, 3-6, 10-7 upset win over third seed Olivia Nicholls and Ukraine’s Valeriya Strakhova. 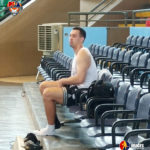