Roberto Gomez and Jeff De Luna displayed steely nerves and rallied mightily as the Filipino duo scored a gutsy 7-5 come-from-behind win over Americans Billy Thorpe and Skyler Woodward Thursday to advance to the quarterfinals of the 2021 World Cup of Pool at the Stadium MK in Milton Keynes, England.

Gomez and de Luna found themselves in a precarious position after losing the first five racks in the race-to-seven duel in the $250,000 competition.

But when an opportunity presented itself, they immediately seized it, their confidence boosted each time they made huge shots while leaving their rivals in utter disgust.

The great escape enabled the Philippine pair to arrange a date with Estonia, which pulled off a thrilling 7-6 win over Great Britain-A.

Having beaten the hosts, Dennis Grabe and Mark Magi will have an extra motivation when they face the fancied Filipinos in the race-to-9 contest.

De Luna and Gomez opened their campaign with an easy 7-3 win over Allison Fisher and Kelly Fisher of Great Britain-B.

The two, along with seven other pairs, are already assured of $9,000 prize each.

Coming off a stunning win over defending champion Austria, Slovakia outlasted No. 16 Czech Republic, 7-6, to set up a quarterfinal showdown with Japan, which beat Russia, 7-2.

Others which made it to the Round-of-8 were Germany which crushed Kuwait, 7-4, and Denmark, which nipped Italy, 7-5. 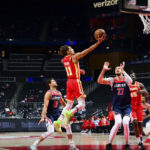