Social media went into a frenzy on Sunday when Tom Brady captured his record seventh Super Bowl victory, cementing his status as one of the best athletes not only in America but in the whole world.
Brady, who joined Tampa Bay last year after two long decades with the New England Patriots, helped the Buccaneers thrash the Kansas City Chiefs, 31-9, in the SuperBowl LVI at the Raymond James Stadium in Tampa, Florida.
Sporting greats like LeBron James and Manny Pacquiao were just few of the athletes who congratulated Brady for his impressive feat at age 42.
James cannot hide his excitement on Twitter and pretty much believes that the American quarterback is the greatest of all time.
“If you know, you know! GOAT talk!” the Los Angeles Lakers superstar wrote in all caps, following a series of tweets as Pacquiao echoed James’ sentiments.
“Congratulations to sports’ GOAT, [Tom Brady]!” wrote the Filipino boxing legend.
Brady’s former team and home for 20 years, the Patriots, won’t be left out of the picture and showed appreciation to their former star player.
Other NBA stars like Damian Lillard, CJ McCollum, Trae Young, and Ja Morant also joined in celebrating Brady’s achievement.
Brady, in his 21st year in the NFL, became the oldest player to suit up in the prestigious Super Bowl in front of a crowd of just 24,835 and around 30,000 “cardboard” fans.
He tallied three touchdowns, completing 21 of 29 passes for 201 yards without interceptions. 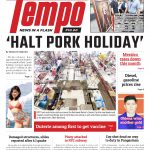