LOS ANGELES (AFP) – The Cleveland Browns ended their NFL playoff drought in spectacular style, exploding for 28 first-quarter points in a stunning 48-37 victory over the Pittsburgh Steelers on Sunday.

The Browns, in the playoffs for the first time since 2002, shook off a spate of Covid-19 absences to notch their first postseason win since the 1994 campaign and send Pittsburgh quarterback Ben Roethlisberger and the Steelers home.

They booked a meeting with the reigning Super Bowl champion Kansas City Chiefs as the Baltimore Ravens set up a showdown with the Buffalo Bills with a 20-13 come-from-behind victory over the Tennessee Titans in the day’s other AFC clash.

In the NFC, the New Orleans Saints ground out a 21-9 victory over the Chicago Bears, keeping 41-year-old quarterback Drew Brees’s dream of a Super Bowl swansong alive.

Browns quarterback Baker Mayfield, 25, wasn’t even born the last time Cleveland won a playoff game, but despite the pandemic-related disruption to his team’s preparations he kept the Browns on track.

‘We believed,” he said of predictions the depleted Browns — playing without a string of players as well as head coach Kevin Stefanski because of Covid protocols — would crumble. ”The people on the outside don’t matter to us, and we believed the whole time.”
The Browns seized the lead in remarkable style on the opening play from scrimmage, when Pittsburgh’s nine-time Pro-Bowl center Maurkice Pouncey sailed a shotgun snap over the Roethlisberger and Browns safety Karl Joseph fell on the fumble in the end zone for a touchdown.
Cleveland’s M.J. Stewart intercepted Roethlisberger on Pittsburgh’s next series and Mayfield connected on a short pass to Jarvis Landry who turned and ran for a 40-yard touchdown that put Cleveland up 14-0.
Kareem Hunt added two rushing touchdowns for the Browns — the second set up by another Roethlisberger interception to take a 28-0 lead — matching an NFL playoff record for points in the first quarter.
Roethlisberger opened the second quarter with another interception, Pittsburgh finally getting on the board with a touchdown midway through the second quarter.
The Browns responded with a TD drive and after a Pittsburgh field goal took a 35-10 lead into the interval.
Pittsburgh narrowed the gap with two third-quarter touchdowns, but Cleveland responded and when Browns linebacker Sione Takitaki intercepted a Roethlisberger pass with 3:16 remaining in the fourth quarter it was essentially over.
Roethlisberger threw four interceptions while Mayfield, making his playoff debut, connected on 21 of 34 passes for 263 yards and three touchdowns without an interception.
Another young quarterback came through in Nashville, where Baltimore’s Lamar Jackson threw for one touchdown and produced a dazzling 48-yard solo score to propel the Ravens.
Jackson finished with 179 passing yards and 136 yards rushing.
It was the first postseason win of Jackson’s career after two previous defeats, and the first time the reigning NFL MVP had helped his team overturn a double-digit deficit. 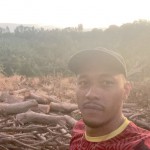