The Bureau of Immigration (BI) is not allowing the entry of passengers from 19 more countries to prevent the spread of the highly infectious type of coronavirus.

BI Commissioner Jaime Morente made the announcement amid the discovery of the super spreader virus in the United Kingdom which has already spread to many countries in Europe, Africa and Asia.

The BI chief said it was President Duterte who ordered the expansion of the travel restriction to stop the virus from reaching our shore.

It can be recalled that flights from the UK have been temporarily suspended since Dec. 24.

“Effective midnight of December 30 to January 15, foreigners coming from and transiting through the 20 countries as well as those who travelled there 14 days prior will not be allowed to enter the country,” Morente stated.

However, Filipino citizens and their families will be allowed entry,  but will be subject to 14-day quarantine upon arrival.

Likewise, exiting passengers will be allowed to leave subject to existing health protocols of the Philippines and the destination country. 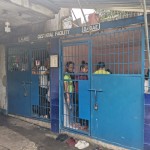