THE newly restored complex of the Church of St. William of Aquitaine, also known as Magsingal Church, on the MacArthur Highway in Magsingal, Ilocos Sur. (National Museum of the Philippines photo)

The National Museum of the Philippines (NMP) formally transferred last Sunday the newly restored complex of the Church of St. William of Aquitaine, also known as Magsingal Church, to the Archdiocese of Nueva Segovia in Ilocos Sur.

Declared as a National Cultural Treasure in 2001, the Magsingal Church complex includes the ruined walls and bell tower of the former Parish Church of San Guillermo de Aquitania which was built in the 18th century under the Augustinians, a school, the present church, and the old convent, now the Magsingal Museum.

“Magsingal is one of the great churches in the Philippines. Its National Cultural Treasure status is beyond question given its high degree of authenticity, aesthetic significance, wonderful retablo, and the whole heritage of faith in the parish and throughout the Archdiocese in the Ilocos Region,” NMP Director General Jeremy Barns said.

“It’s been our privilege at the National Museum of the Philippines to have also been present at the church compound since the 1980s. We have been really concerned through the years to bring out the ruins of the former church that dates from the 18th century and to integrate our museum with the existing church, the ruins, and the famous bell tower,” he added.

The restoration and site improvement of the church complex, particularly the former church ruins, the bell tower, and the surrounding grounds, was initiated by the Office of Deputy Speaker Ilocos Sur Rep. Deogracias Victor B. Savellano. It was carried out by the NMP consistent with its mandate to restore cultural properties and in partnership with the Archdiocese of Nueva Segovia. 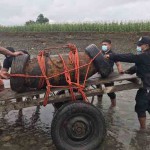