WHILE in quarantine, Bea Alonzo discovered the joy of painting…along with garden­ing. Her subject is mostly plants and flowers.

Mark Bautista returned to his other love, painting, also during quarantine.

He was an architecture student in Cagayan de Oro when he switched to singing and acting.

Ten of Mark’s painting sold for P419,000, which he donated to charity.

Raymond Lauchengco made good use of his idle time. He tried his hands at sculpture, using as medium odds and ends he found lying around the house. The result is 14 pieces which went on exhibit online. Proceeds went to workers who lost their jobs.

ARTISTS IN SHOWBIZ – There are many artists in showbiz, painters in par­ticular.

By the way, Richard has a sizeable collection of art pieces, mostly contempo­rary.

Brosnan, as a student, painted a lot of landscapes and abstracts. But showbiz came in the way. He re­turned to painting in the late ‘80s when his wife be­came very ill and died.

He said painting was one of his therapeutic crutches, the other being prayer. 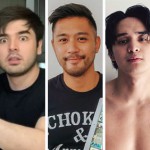