AS soon as Manny the Pac­man decides to hang up his gloves – after an upcoming fight in Saudi Arabia in November? – we should make him traffic czar. He’s the only one who can stop traffic. He’s the only one who unifies this fractious nation of 100 million lawbreakers. He uses words sparingly, letting his fists do all the talking, so you pigheaded people beware.

After Sunday’s close fight with Keith Thurman, Senator Pacqui­ao is now richer by a guaranteed purse of $20 million (R1.04 bil­lion), or $15 million after taxes. (Where’s the BIR in this? Mom­my Dionisia recently won her tax case against the bureau.) The champ’s new wealth does not include pay-per-view proceeds, commercial endorsements and the like.

What more does the fighting senator have to prove? That life begins at 40? That it’s only natu­ral for the rich to get richer? That he may be a humble sportsman but he’s out to proudly smash more records as a pugilist? The lot of us who are nervous each time he’s about to face a younger, taller, mean-looking, mean-sounding foe can’t take it anymore. That’s because we’re afraid to even think of the pos­sibility that he could end his career by hitting the floor. As trainer Freddie Roach admitted to an AFP writer, “This is true” that “boxing history is littered with veterans who needed one fight too many to realize they are shot.”

Which is not to say that we do not savor this latest victory. While Team Pacquiao was cele­brating in Las Vegas, the Filipino nation cheered from Las Piñas to the moon and back, and in SM North, the mood was Christmas. The three-day mall-wide sale culminated in Sunday’s midnight madness, with hordes of shop­pers – including parents push­ing their babies or puppies in their prams – who filled every space, store and restaurant to the brim; it was unbelievable, the crowd seemingly multiplying after news of the split decision.

Not to split hairs, but pre-fight predictions were a see-saw be­tween the two boxers. Pacquiao fans sounded less sure than in previous contests, a few said outright it was too close to call. 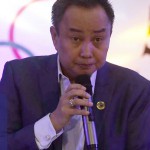