CARMONA, Cavite ­– Lefty Christopher Hickman of the US and Angelo Que slowed down despite a change in tee-time but moved up the rankings just the same with 66 and 67, respectively, with half of the field still battling it out in the heat and wind in the second round of the ICTSI Manila Southwoods Championship at the Legends course here.

Hickman and Que bucked a late first round start to shoot a pair of 65s Tuesday with the former coming through with superb iron shots to birdie five of the last 11 holes yesterday for a couple of 33s and the latter hitting three birdies in the first six holes at the back then overcame two bogeys with three more birdies, the last on the ninth that capped a 34-33 card.

Hickman, who toughened up in the PGA Series-China the last four months with a top five finish in the Sanya Championship in Haikou last April, thus took the clubhouse lead at 11-under 131, one stroke ahead of Que (132), who, for his part, had taken a break from his Japan PGA Tour campaign to join the title hunt in this $100,000 event serving as the third leg of the third season of the Philippine Golf Tour Asia.

“I had a lot of birdie chances and I’m glad I made most of them,” said Hickman, who moved 36 holes away from marking his first foray on the Philippine Golf Tour Asia with a victory.

Que defied the early gusts with steady play but rued his missed birdie putts inside seven feet on Nos. 5, 8 and 13, which had he made would’ve pushed the former Philippine Open champ past Hickman.

“The course is in good condition but the wind came into play right on the first hole,” said Que, who placed third in Kansai Open last month but didn’t fare well in the Japan PGA Championship last week.

Clyde Mondilla, the reigning Philippine Open champion making a comeback of sorts from an injury, likewise held back with a 68 after a 66 for provisional hold of third at 134, three shots off the pace with 36 holes left to play in the event sponsored by ICTSI and organized by Pilipinas Golf Tournaments, Inc.

First day leader Tim Stewart of Australia and the likes of early contenders Thai Tawit Polthai and local ace Justin Quiban, Thai Ratchapol Jantavara were still on the fairways at presstime, trying to sustain their big first round charge but in tougher conditions.

Charles Hong, who missed matching Stewart’s opening 63 with a last-hole bogey late Tuesday, struggled on an early start, mixing three birdies with the same number of bogeys and ended up with an even-par 71 to slip to 135, now behind the new leader.

Sharing the spotlight is amateur Josh Jorge, who put in a second 68, missing joining Hong at fourth with a bogey on No. 18. He fell to joint fifth at 136 with Thai Sutijet Kooratapisan and Korean Shin Seung Woo, who fired identical 66s.

Thai Chonlatit Chuenboonngam also safely made it to the last 36 holes of the event backed by PLDT Enterprise, Meralco, BDO and PGT Asia official apparel Pin High with a 137 after 68 while Aussie Jack Sullivan shot a 67 for provisional joint 10th with Ferdie Aunzo, who carded a 69, at 138.

Likely to miss the 50-plus ties cut tabbed at one-over (143) at presstime are Mars Pucay, who skied to a 77 after a 68 for a 145 and reigning PGT Order of Merit winner Jobim Carlos (75-151), while fighting for a slot is last year’s champion Jay Bayron, who stood at two-over after six holes. 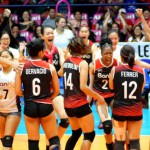 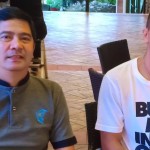