Rajko Toroman believes Gilas Pilipinas will be a “very competitive team” despite the odds stacked against them in Group D of the FIBA World Cup in Foshan, China.

Gilas will be hard-pressed to secure a place in the next round of the world competition after being bracketed alongside 2014 World Cup runner-up and 2016 Rio Olympic silver medalist Serbia, Italy and Angola.

Though convinced it will be a tough task for Gilas to hurdle the big obstacles, the coach of the original Gilas squad from 2009 to 2011 was also upbeat with the team’s competition before the Aug. 31 opener.

“I think we have a better chance against Italy than against Serbia,” Toroman said after calling the shots for William Jones Cup-bound Mighty Sports in Monday’s 85-all tie against Gilas at the Meralco Gym.

“(The) Philippines can make surprises but they have to play an excellent game against Italy,” Toroman continuing, adding that it won’t cause for many to disappoint if Gilas fails to progress given the tough group.

“I think nobody will be disappointed here if the Philippines don’t reach the next round because it’s really tough competition there.”

The Serbian mentor felt that their tune-up didn’t show much of Gilas’ strength and weaknesses, given the team’s twice-a-week practices and the absence of several players due to PBA commitments.

But Toroman is liking Gilas’ depth and the presence of naturalized player Andray Blatche and Kiefer Ravena, who is expected to make the roster despite being limited to practices with his FIBA suspension expiring on Aug. 24. 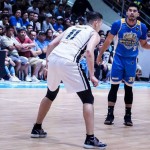