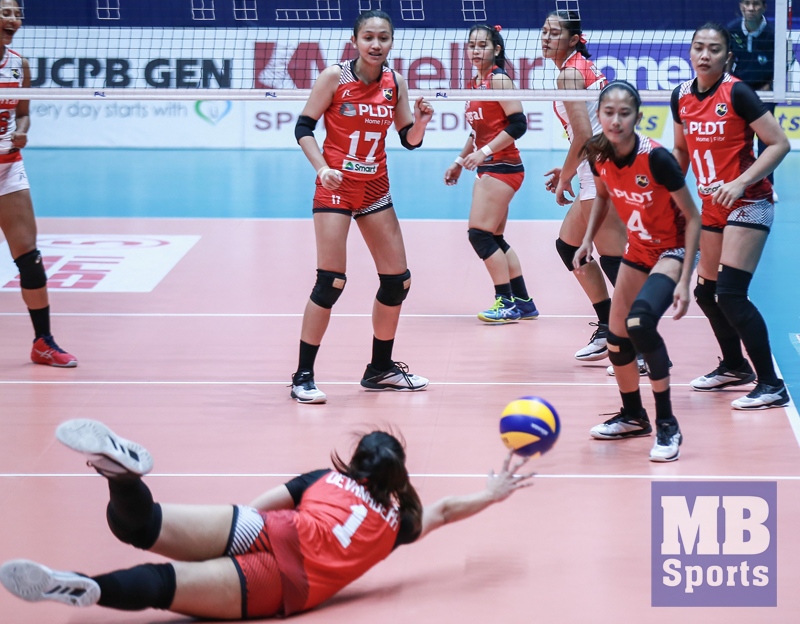 PLDT's Sasa Devanadera falls short in her bid to save the ball during their PSL All-Filipino Conference match against Cignal at The Arena in San Juan City. (MB photo | Rio Deluvio)

Action fires off at 7 p.m. with the Cargo Movers looking to sustain their fiery form against the HD Spikers, who are eager to bounce back after absorbing their first setback in this prestigious women’s club tourney bankrolled by Team Rebel Sports, SOGO, Eurotel, PCSO, Cocolife, UCPB Gen, Mueller, Senoh, Asics, Bizooku and One Sport.

Meanwhile, also shooting for their third win is Generika-Ayala, which clashes with listless Sta. Lucia in the first game at 4:15 p.m.

After securing the services of Filipino-American spiker Kalei Mau, the Cargo Movers were unstoppable as they clinched their first four matches in this tourney that also has ESPN5 and Kapatid TV5 as broadcast partners.

Mau, the former Arizona star who joined the Cargo Movers following the disbandment of United VC, erupted for 21 attacks and two blocks in their 25-21, 17-25, 27-25, 25-19 creaming of bitter rival Petron last week.

“Kalei is really a huge addition for us as we finally have a go-to-guy in crunch time,” said F2 Logistics coach Ramil de Jesus, who is also drawing inspired performance from the support crew of Ara Galang, Aby Marano, Michelle Cobb and Dawn Macandili.

“But she still has more to learn, especially in choosing when to attack. She’s more of a power attacker and attacking smartly and wisely is something we can teach along the way.”

But plucking their fifth straight win will never be easy.

The HD Spikers also re-tooled their roster and added May Luna and Norielle Ipac, two of de Jesus’ vital cogs at De La Salle University, as well as Alohi Robins-Hardy, who played with Mau at United VC.