The Valenzuela Classic staged a grand comeback while the Basilan Steel showed defensive might as they both won in overtime in the Maharlika Pilipinas Basketball League Lakan Season at Valenzuela City Astrodome on Wednesday, June 26.

Trailing by 13 points with 3:22 left and by four with 14 seconds to go, the Classic got the lift from Chris De Chavez who made a spinning step back triple to forge the extension at 71-71 then completed his heroics with five points, including the dagger three, in extension as Valenzuela stunned favored Bataan, 92-86, in the nightcap of a tripleheader.

The reinforced Steel, on the other hand, held the Pampanga Giant Lanterns without a field goal in the extra five minutes to tally an 83-74 victory, their second in as many starts.

Jay Collado and Gab Dagangon drilled in a triple each for the Steel in the last 43 seconds to doom the Lanterns, who were within striking distance at 74-76, following two free throws by Levi Hernandez.

Prized recruit Hesed Gabo also played a pivotal role for the Steel as he poured nine of his 12 points in the fourth quarter that ended at 71-all.

Jerald Bautista topscored for the Jumbo Plastics-supported Steel with 18 points, followed by Dagangon with 14. Anthony Bringas also shone with 11 points and as many rebounds for coach Jerson Cabiltes.

The Lanterns, who got 25 points from Hernandez absorbed their second straight loss after a 94-85 victory over the General Santos Warriors on June 13. 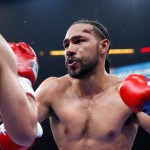