Anthony Davis will form a high-powered NBA strikeforce alongside LeBron James next season after the New Orleans Pelicans agreed to a trade deal with the Los Angeles Lakers, US media reports said Saturday.

ESPN and the Los Angeles Times said unsettled star Davis will join the Lakers in a move which will see the Pelicans receive multiple players and draft picks in return.

The Pelicans roster will be bolstered by the arrival of Lakers players Lonzo Ball, Brandon Ingram and Josh Hart.

It means the Pelicans now have the first and fourth picks in the draft, potentially giving the franchise the chance to build a championship-contending team.

For the Lakers, the move gives James the sort of high-caliber roster reinforcement he has been craving since his arrival in Los Angeles from the Cleveland Cavaliers last summer.

Davis, 26, shares the same agent as James, and has been agitating for a move since January, when he informed the Pelicans he planned to leave.

The Lakers made a bungled attempt to trade for Davis in February but pulled out of negotiations with New Orleans after complaining of “outrageous” demands by the Pelicans.

The Lakers had reportedly agreed to offload Ball, Ingram and Hart as well as Kyle Kuzma and Kentavious Caldwell-Pope in the earlier negotiations.

The collapsed deal was reported to have destabilized the Lakers dressing room and the team’s season tailed off dramatically as they failed to make the playoffs once again.

That disappointing finish to the Lakers season led to the shock resignation of president of basketball operations Magic Johnson.

Johnson later said a rift with Lakers general manager Rob Pelinka had been behind his departure, accusing his former colleague of “betrayal.”

On Saturday, however, Johnson took to Twitter to congratulate Pelinka and Lakers owner Jeanie Buss.

“Great job by Owner Jeanie Buss bringing Anthony Davis to the Lakers! Laker Nation, the Lakers are back in a championship hunt! Congratulations to the entire organization.

“I know LeBron James has a big smile on his face. I’m loving this!!”

Davis is a six-time NBA All-Star who has averaged more than 23 points per game through seven seasons with New Orleans, who drafted him with the first overall pick in 2012. 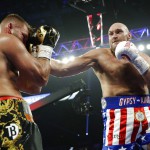