Sean Ramos of Luisita Golf & Country clubtake a shot on hole no. 11 during the 3rd day of the 71st PAL Interclub Golf tournamen at the Bacolod Golf & Country Club. Photo by Albert Garcia

Aidric Chan and Carl Corpus clinched the first two slots as expected while Sean Ramos beat four others for the third and last berth in the SEA Games-bound national men’s golf team despite a 75 at the close of the grueling two-week qualifiers yesterday at the Luisita Golf and Country Club in Tarlac.

Ramos bucked back-to-back double-bogey mishaps from No. 11 with a birdie on the par-3 13th then parred the rest to salvage a 36-39 card for an eight-round total 587, edging a late-charging Gab Manotoc, who rallied with a 72, by two.

Chan and Corpus had virtually secured the first two seats after the seventh round when they pulled away from the field by at least six strokes with the duo finishing tied at 580 after a 69 and 70, respectively.

Edward Dy, who bounced back into contention with a fiery 67 to tie Ramos at third heading to the penultimate round Wednesday, faltered when it mattered most, hobbling with a 40 at the front and finishing with a 77, settling for joint fourth instead with Manotoc at 589.

Ramos pounced on Dy’s bogey-ridded game with a birdie-bogey frontside to zero in on the coveted third seat then hung tough despite a shaky backside start to frustrate Manotoc, who matched Ramos’ opening 36 but fell short of his own rally with another 36.

The troika will thus lead the country’s campaign against a tough set of regional rivals in the biennial games slated Nov. 30-Dec. 10 with the National Golf Association of the Philippines lining up a series of training and practice sessions at the Robert Trent Jones, Sr.-designed layout leading up to the SEAG week to cash in on the proverbial “home-court” advantage. 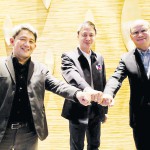