Honorio “The Rock” Banario cannot wait to make his return to ONE Championship.

With all his personal commitments done and accounted for, the former ONE Featherweight World Champion is now gearing up for his return to The Home Of Martial Arts and he is doing everything to make sure he is in the best shape of his life.

“After the election, I started going back to training just to get my cardio back,” said Banario, who helped his father campaign for a local position in Mankayan, Benguet.

The Benguet native was also recently married to his longtime girlfriend Jessica, making him one of the busiest men outside of the Circle in Team Lakay.

Now he hopes to be included on the upcoming ONE: DAWN OF HEROES card, which is set to take place at the Mall Of Asia Arena in Manila on Friday, 2 August.

To make sure he is well equipped for his return, Banario traveled to the Philippine capital with his team to work on their grappling with two-time Olympian and Brazilian Jiu-Jitsu black belt John Baylon.

“I started working on my shortcomings in my previous match, particularly with my strength and conditioning. Now I am heading to Manila for jiu-jitsu, and then back to Baguio for mixed martial arts,” the Filipino confessed.

“We are very open to learning different types of martial arts because it’s needed for our game. We had an inkling to work in the gym of coach John because he’s legitimate and he’s well known.”

For “The Rock,” he is grateful for opportunities like this — particularly to Baylon, who has been helping him and his Team Lakay stablemates for four years now.

“He’s always welcomed us with open arms, and that’s why we keep on coming back to his gym,” he added. “Everything that he has been teaching us, we’ve been able to use it in mixed martial arts.”

Banario needs to be better than ever, as he is battling for something bigger than himself now.

The 29-year-old Team Lakay standout and his wife are expecting their firstborn child in the next few months, and that pushes him to be the best athlete he can be.

“Now that I have a family, I need to provide for them,” he said. “I’ll be having a child soon, and that’s what I am fighting for now. It’s a big motivation for me to do more in my career.” 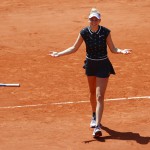 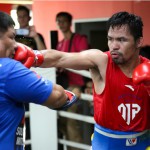