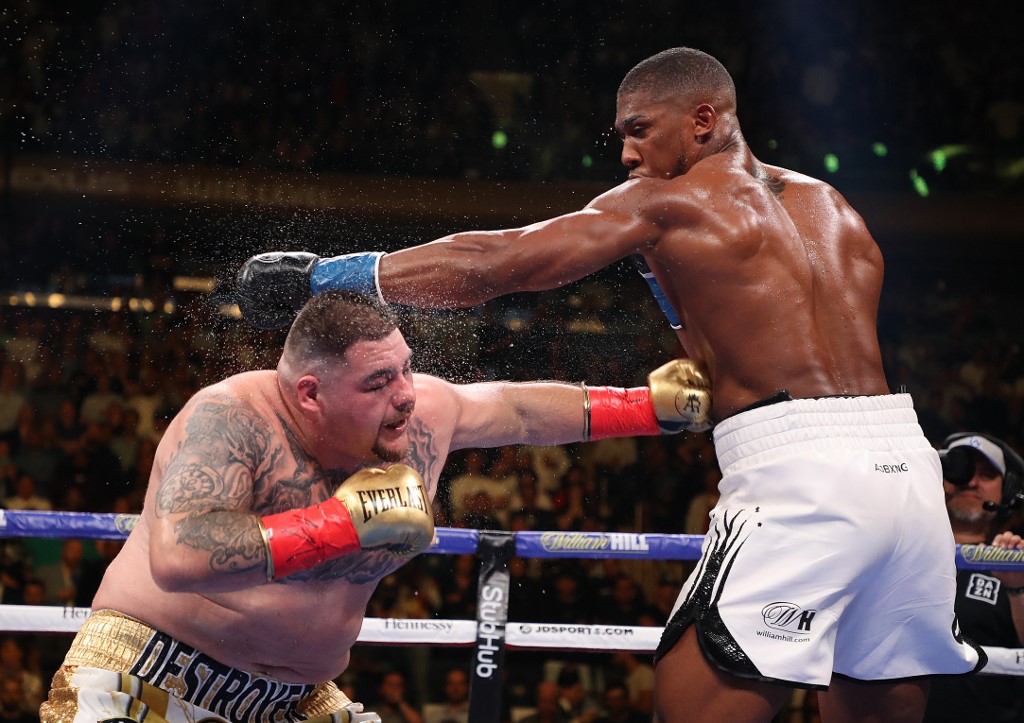 Anthony Joshua knocks down Andy Ruiz Jr in the third round during their IBF/WBA/WBO heavyweight title fight at Madison Square Garden on June 01, 2019 in New York City. (Al Bello/Getty Images/AFP)

Anthony Joshua will attempt to reclaim his heavyweight titles from Andy Ruiz Jr. before the end of year after activating a rematch clause in his contract, promoter Eddie Hearn said Tuesday.

In a brief post on Twitter, Hearn said Joshua had opted for an immediate rematch against Ruiz Jr, who shocked the boxing world with a seventh-round knockout of the British fighter on Saturday.

“After meetings with AJ, (trainer) Rob (McCracken) and the management team in NY, we have today triggered the contracted rematch clause with Andy Ruiz Jnr,” Hearn wrote. “The fight will take place in Nov/Dec at a venue to be confirmed shortly.”

Ruiz Jr. pulled off one of the biggest upsets in the history of the heavyweight division at Madison Square Garden on Saturday with his sensational stoppage of Joshua, the previously unbeaten WBA, IBF, and WBO heavyweight champion.

The 29-year-old Ruiz started the fight as a massive 32-1 underdog but floored Joshua four times on his way to a win which upended the heavyweight division.

In comments to ESPN later Tuesday, Hearn said Joshua was anxious to get back in the ring with Ruiz as quickly as possible.

“There was no point in waiting,” Hearn told the US sports network. “We’ve talked about it and it’s happening. There’s no other fight AJ wants, so there was no point waiting 30 days. Everybody needs clarity. We sat down and it wasn’t even a case of him asking what else is out there. The rematch is the fight we need, and that’s what we’ll be doing.”

Hearn had initially indicated the rematch is likely to take place in Britain, where Joshua regularly sells out large-capacity venues. However he told ESPN on Tuesday that the choice of venue remained open.

“My gut feeling was the UK but not guaranteed,” Hearn said. “We have to look at everything. The people at (US broadcaster) DAZN and Madison Square Garden would like to do Part 2 in the US.

“Joshua came to Andy Ruiz’s country for the first fight, so it kind of makes sense to the second fight in the UK. So we’ll see.” (Agence France-Presse)