Zedrick Borja banked on his swim skills anew as he crowned himself the Alaska Fortified IronKids champion for the second straight time while Samantha Corpuz clinched top honors in the girls’ premier side at the WOW Recreation and Activity Center in Subic Bay Freeport Zone yesterday.

Borja, from San Pedro, Laguna, timed 5:33 minutes in the opening 400m swim leg then held off Miguel Tayag and Jose Maria Tayag’s charge in the closing 3km run part to score a follow-up to his victory at Vermosa last month. He clocked 11:53 minutes in the run to finish with 18:20 for the gold medal in the 13-14 years division of the event put up by Alaska for the country’s future triathletes.

Miguel Tayag rallied with an 11:41-minute clocking in the run stage to finish second in 18:35 while Jose Maria Tayag took the bronze in 18:37.

Daniel David placed behind Lozada in boys’ side in 13:20.7 with Rolando Escat Jr ending up third in 13:28.7 in the event also held to promote an active and healthy lifestyle among kids. 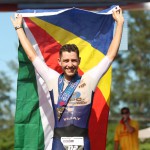