Close to 300 kids gear up for a showdown in their side of the duel as the future of triathlon clash in the Alaska Fortified IronKids on Saturday at the WOW Recreation and Activity Center in Subic Bay Freeport Zone.

This marks the third time that the local junior version of the IRONMAN will be held as a swim-run event following the Davao City and Vermosa, Cavite competitions with the Subic cast to feature the sport’s regular campaigners in the 6-to-14 years old bracket with a number of new faces also out to steal the spotlight from the fancied names in the event starting at 6 a.m.

The IronKids serves as a fitting appetizer to the Century Tuna IRONMAN 70.3 Subic Bay presented by Big Boss Cement which fires off Sunday with Seychelles’ Nick Baldwin setting out for back-to-back title feat in the country’s triathlon capital following his triumph in the first full IRONMAN last year.

Also lined up on Saturday is the Sun Life Bike Out and the IRONMAN 70.3 Subic Bay Expo at 9 a.m., the media confernece at 3 p.m. and the Beliinda Granger race tips at 4 p.m., among others.

Launched a decade ago, the Alaska IronKids, then made up of a swim-bike-run event, has become one of the highlights of each IRONMAN competition. It is staged to promote a well-balanced lifestyle for kids and at the same time serves as venue for family bonding. It is also held to help kids develop the values of discipline, hard work, integrity and determination through a series of races.

The organizing Sunrise Events, Inc., however, decided to drop the bike leg from the usual 400m-swim, 9km-bike, and 3km event to lessen the competition’s barriers to entry of which purchasing a bike is a prime example.

Meanwhile, Baldwin gears up for a strong challenge from the likes of former 70.3 world champion Tim Reed and multi-titled Sam Betten along with fellow Australians Tim Van Berkel and Conor McKay with Colombia’s Rodrigo Acevedo and Oli Stenning of Great Britain as he seeks to make it two-in-row in Subic, this time on a shorter 1.9km swim-90km bike-21km run event. 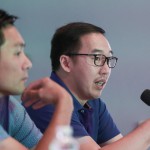