TNT KaTropa’s Terrence Jones no doubt stood above the rest of imports who suited up after the first week of hostilities in the PBA Commissioner’s Cup.

Jones lived up to his billing as a former NBA cager for the Houston Rockets by posting an average of 42.0 points, 18.0 rebounds, 4.5 assists, 1.5 steals and 2.0 blocks in TNT’s victories over NLEX and Alaska.

The 27-year-old once again dazzled for the KaTropa last Saturday when he dropped 43 points in the 99-85 rout of the Alaska Aces at the Smart Araneta Coliseum.

Though Jones’ dominant showing on both ends has given TNT plenty of reasons to be optimistic, coach Bong Ravena stressed that there’s plenty of challenges ahead.

TNT has yet to play talented teams like San Miguel Beer, Barangay Ginebra San Miguel and Magnolia that will test Jones’ capabilities.

“We’re expecting that he can be consistent on offense,” said Ravena. “But we still have to face the bigger teams ahead so there’s still room to improve.”

Stepheson normed 24.5 points and 28.0 rebounds, providing the Elite’s need for a presence in the paint.

The Elite were seeking to move 3-0 in the conference at presstime against the Columbian Dyip.

Brownlee and the Kings try to barge into the win column at presstime against the Meralco Bolts, who also have a talented import in Gani Lawal. 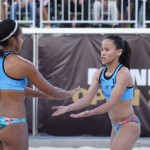