True to their promise, the Bulldogs persevered and retained their UAAP men’s volleyball crown with a finals sweep over the Far Eastern University Tamaraws on Wednesday at the Mall of Asia Arena.

The Bulldogs, however, didn’t start with a bang in their campaign despite their international triumph accompanied by a preseason training stint in Japan. They lost to the Tamaraws in straight sets on opening day.

For NU coach Dante Alinsunurin, it was a wakeup call and his boys responded to his challenge. 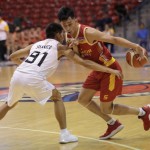