Centro Escolar University looks to bolster its chances at topping the Foundation Group while Marinerong Pilipino hopes to gain an inside track at a quarterfinals berth in the PBA D-League at the Ynares Sports Arena in Pasig City.

CEU takes on slumping Wangs Basketball at 4 p.m. after Marinerong Pilipino’s encounter with University of Perpetual Help at 2 p.m.

Currently tied for the lead at 6-1 with City of Valencia-San Sebastian, CEU needs to win its final two games to clinch the top seed in the group.

But the Scorpions will enter the game seeking to bounce back from a shock 74-67 loss to SMDC-National University last April 25.

Maodo Malick Diouf, Tyrone Chan, Judel Fuentes and Keanu Caballero will among the players coach Derrick Pumaren hopes will deliver big numbers against Wangs, which is currently on a four-game skid after a 3-1 start. 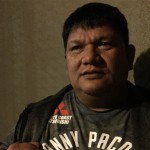