Bacoor Strike sa Serbisyo snatched a 93-85 overtime win over Valenzuela and assured itself of a top two finish in the South Division of the Metro League Reinforced (Second) Conference Thursday night at the Hagonoy Sports Complex in Taguig City.

Down by two in the last seven seconds of regulation, 78-80, Mark Montuano came to the rescue of the Strikers as he connected on a game-tying lay-up at the buzzer off a Mark Doligon pass to force extra time.

There was no stopping the undermanned Bacoor squad since then as Montuano went on to add five more points in OT with the help of Doligon and Paolo Castro to extend their winning streak to seven games in the event backed by the Metro Manila Development Authority (MMDA), the Philippine Basketball Association (PBA) and with Barangay 143 as league presentor and Manila Bulletin as media partner.

In the other game, home team Generals trounced Pasigueño, 86-54, to follow Bacoor onto the post-season of this import-flavored M-League conference also bankrolled by Synergy 88, World Balance, Excellent Noodles and San Miguel Corporation. 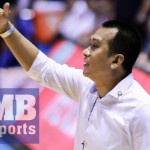