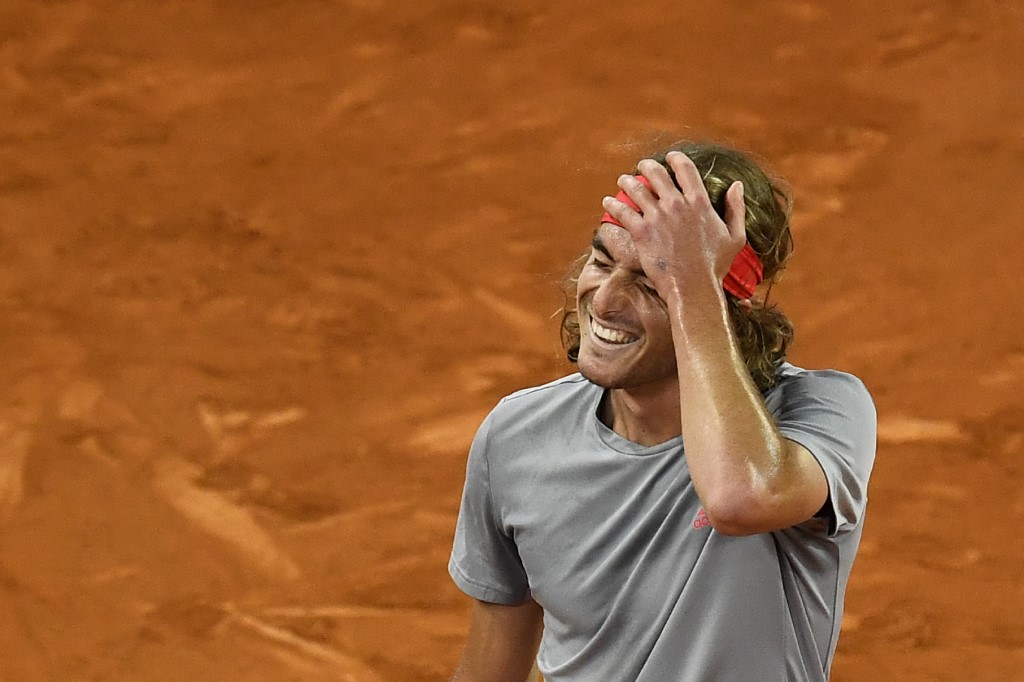 MADRID (AFP) – Novak Djokovic will play Stefanos Tsitsipas for the Madrid Open title after the 20-year-old Greek stunned Rafael Nadal on Saturday to win a thrilling semi-final 6-4, 2-6, 6-3 on his fourth match point.

Nadal had been a clear favourite to face Djokovic in Sunday’s showpiece at Caja Magica but the 17-time Grand Slam champion extended his stuttering build-up to the French Open with another surprise defeat.

Tsitsipas’ surprise victory means he reaches his fourth ATP final of the season while vindicating those that have him circled as a future star of the men’s game.

‘‘Emotionally it was very tough, it was one of my toughest wins,’’ Tsitsipas said.

It might be too early to expect the world number nine to challenge at Roland Garros later this month but, with a fearless style and formidable forehand, he is developing a habit for delivering on the big stage.

He ousted Roger Federer from the Australian Open in January and, as well as Nadal, has beaten Alexander Zverev and Dominic Thiem, both twice, and Djokovic, whom he played on hard in Canada last year and prevailed in three sets.

Tsitsipas will draw confidence from that result ahead of the final but arguably even more so from overcoming Nadal, on clay, which Djokovic had earlier described as the ‘‘ultimate challenge’’ following his own 7-6 (7/2), 7-6 (7/4) victory over Dominic Thiem.

By his own high standards, Nadal’s clay-court swing has been disappointing.

He lost in the last four in both Monte Carlo and Barcelona, arriving in Madrid without winning either tournament for the first time since 2015.

‘‘I have not played well enough,’’ admitted Nadal. ‘‘I’ve won a lot for many years on this surface but this year it hasn’t been like that.’’

Few would bet against the Spaniard claiming a 12th success in Paris but the showings of Djokovic, and Thiem, in this tournament suggests it is far from a foregone conclusion.

Djokovic enhanced his credentials as perhaps the greatest threat by edging past Thiem, who took down Nadal en route to clinching the trophy in Barcelona last month and had also knocked out Federer in the Madrid quarter-finals.

‘‘I thought coming into the match, he was the favourite to win it,’’ Djokovic said. ‘‘So that’s why it’s a great win for me.’’

Djokovic had also stuttered, enduring early exits in Indian Wells, Miami and then Monte Carlo, but Thiem found the 31-year-old close to his best.

It was a timely reminder of why Djokovic has won the last three Grand Slam titles and will hold all four concurrently by winning his 16th at the French Open.

‘‘He’s getting back to his 100 percent again,’’ Thiem said. ‘’The closer it comes to the Grand Slams, the better he’ll play and we are pretty close to the French Open.’’

Nadal seemed to have the momentum after winning 13 out of 16 points at the end of the second set but he spurned two break points in the decider before Tsitsipas broke twice for 5-2.

Still Nadal fought back, breaking back once and then saving three match points, the last after a nerve-shredding drop-shot. But a missed volley followed and, at the fourth time of asking, a relieved Tsitsipas finally got over the line when a weary Nadal backhand hit the net.

Djokovic proved too good in both tie-breaks against Thiem but offered the shot of the match at 4-4 in the first set.