VERSATILE: Ian Sangalang of the Magnolia Hotshots scores against San Miguel’s Arwind Santos during Game 3 of their PBA Finals on Sunday at the Smart Araneta Coliseum. The Hotshots won, 86-82, to retake the lead in their best-of-seven title series. (PBA images)

The Magnolia Hotshots Pambansang Manok are not only up 2-1 in the PBA Philippine Cup Finals but they’re also making the defending champion San Miguel Beermen play the role of a counterpuncher.

Magnolia has set the tone after three games of the best-of-seven series behind a collective effort on the defensive end, leaving San Miguel groping for form.

Sunday’s 86-82 victory at the Smart Araneta Coliseum saw the Hotshots cutting the Beermen’s “head of the snake” in June Mar Fajardo, who shot 4-of-11 from the field despite 17 points and 14 rebounds.

Veteran Rafi Reavis, Ian Sangalang and rarely-used Kyle Pascual were mainly responsible for making life miserable for Fajardo, who had made 67 percent of his attempts in the first two games.

Coach Chito Victolero’s team also forced San Miguel to shoot almost 33 percent from the field, a disappointing number for a team that thrives on offense in this stage of the conference.

Leading scorer Arwind Santos finished with 19 points but was 8-of-22 from the field and Chris Ross and Marcio Lassiter were a combined 4-of-19.

Terrence Romeo played with better composure after a Game 2 ejection for arguing at an official but was 5-of-13 and Alex Cabagnot shot 4-of-13.

“We’re the No. 1 defensive team in the league and kailangan namin maging consistent. Sa offense, everybody can score but focus pa rin kami sa depensa,” he added.

Despite making the Beermen react to their every move, Hotshots guard Mark Barroca cautioned that there’s no reason for them to have a false sense of security when it goes for a commanding 3-1 lead on Wednesday. 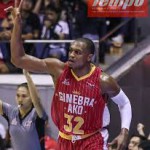