Ginebra is bringing back 6-foot-5 Brownlee for a sixth consecutive stint in import-laden tournaments despite having to match up against bigger counterparts in the Commissioner’s Cup has a maximum height limit of 6-foot-10.

Cone, however, is far from concerned, knowing that Brownlee was successful in helping the Kings beat the San Miguel Beermen for the championship of last year’s midseason tournament.

“I think a lot of teams are looking for size in the 6-foot-10 import conference,” Cone said after serving as a guest analyst in the television coverage of the ongoing Philippine Cup Finals between Magnolia and San Miguel.

“But we have size and we are looking for versatility, and Justin’s coming in and lends us a lot of versatility so we can do a lot of different things,” added Cone.

The Kings already have 7-foot center Greg Slaughter and 6-foot-9 Japeth Aguilar, which gives Cone luxury to bring in a familiar figure in Brownlee.

Brownlee is due to arrive as early as this week from Lebanon where he had helped Al-Riyadi capture the Lebanese Basketball League championship last Sunday.

Ginebra will enter the second conference determined to atone for its loss to Magnolia in the Philippine Cup quarterfinals.

The Kings took Game 1 of the best-of-three series but the Hotshots bounced back to win the next two games and the series by an average margin of 21 points.

“We were extremely disappointed with our performance and it’s just something we should never take lightly,” Cone said. “We owe it to our fans to get to the semis and beyond and being beaten in the quarterfinals is a no-no.

“But at some point, we have to put it away and move forward,” added the 20-time champion mentor. 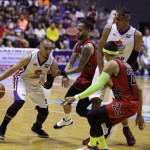