James Harden out-dueled Kevin Durant down the stretch to lift the Houston Rockets to a 126-121 overtime victory over Golden State on Saturday that trimmed the deficit in their NBA playoff series.

Harden drained a three-pointer with 49 seconds left in overtime and after Durant made three free throws he added a step-back floater that proved the final dagger.

“Close the game — that’s what I’m here for, that’s what I do,” said Harden, who finished with 41 points, nine rebounds and six assists.

“He’s phenomenal,” Rockets coach Mike D’Antoni said of Harden. “I don’t even think he played great — in Harden-world. He could even go up to another level.”

The Rockets, coming off back-to-back defeats on Golden State’s home floor in Oakland, California, narrowed the gap in the best-of-seven Western Conference second-round series to 2-1.

The Rockets withstood a 46-point performance from Durant, who threatened to spoil the Rockets’ return home when he opened the fourth quarter on a 10-2 scoring spree that saw the Warriors turn a seven-point deficit into a 94-93 lead.

In a see-saw final period, two free throws from Harden knotted the score at 112-112 with 38.7 seconds left.

Durant missed a jump shot and then Houston point guard Chris Paul got wrapped up by Klay Thompson and Durant as he drove for a basket and it went to overtime.

“It’s going to be a fight, every possession, every game,” Harden said. “You’ve got to be physically tough, mentally tough.”

Forward Eric Gordon scored 30 points — 20 in the first half — and Clint Capela added 13 points and 11 rebounds for the Rockets.

In addition to Durant’s big night, Draymond Green posted his sixth career playoff triple-double with 19 points, 11 rebounds and 10 assists for the Warriors.

Andre Iguodala scored 16 points, connecting on three of four three-pointers to help the Warriors challenge despite a poor shooting night for Stephen Curry and Thompson, who combined to make just four of 15 from three-point range. (AFP) 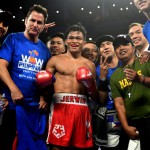