More than the offensive struggles of San Miguel Beer in Game 1 of the PBA Philippine Cup finals series against Magnolia Hotshots Pambansang Manok, veteran forward Arwind Santos said focus should be on improving the team’s defense if they intend to get even in their title sseries at the Smart Araneta Coliseum.

While many pointed to the team’s shooting woes in the series opener Wednesday, which resulted to a 99-94 loss against Magnolia, Santos said their porous defense did them in.

San Miguel converted just 37 percent from the field, or just 32-of-85.

Even with the loss, Santos said it’s in their culture not to blame each other.

Instead, they try to find ways to improve and learn from the mistakes as focus now shifts on Game 2 as they try not to fall 0-2 in the title series – something that is likely with the way Magnolia executed in Game 1. 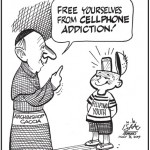