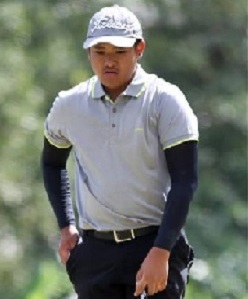 Carl Corpus blew a one-under card with a shaky windup for a 75 but nipped Sean Ramos in a playoff to clinch the top seeding in the Philippine Amateur Open Match Play Championships at the Luisita Golf and Country Club in Tarlac yesterday.

Corpus holed out with back-to-back double bogeys for a 36-39 as the defending champion pooled a 148 after 36 holes of stroke play elims then beat Ramos for low medal honors heading to the knockout stage beginning today. He clashes with Korean Ha Tae Won, who finished at 160 after an 82 and edged Jeffrey Gabe, who shot a 76, in the countback for the 16th and last spot in the tournament proper of the event sponsored by the MVP Sports Foundation.

Leandro Bagtas also carded a 74, which proved to be the best in tough conditions at the Robert Trent Jones Sr.-designed layout, and finished third with a 150 for an interesting duel with No. 14 Josh Jorge, who groped for an 81 and a 159.

Bucay takes on Kim in today’s Round of 16 with Petil mixing it up with Arevalo, Otake squaring off with Wong, Rolida facing off with Cruz, and Barro tangling with Castro.