National University dashed University of the Philippines’ semifinal hopes with a hard-earned 25-21, 26-24, 17-25, 23-25, 17-15 victory Sunday in the UAAP women’s volleyball tournament at the Mall of Asia Arena in Pasay City.

Already eliminated from the Final Four race, the Lady Bulldogs still asserted their might in the defensive lane and held their composure in the crunch on their way to their fourth victory in 13 outings.

The win not only booted UP out of the semis race by slipping to 6-7 at fifth but also allowed University of Santo Tomas and Far Eastern University to complete the Final Four cast that also includes Ateneo and defending champion La Salle.

The UST Tigresses made a return trip to the semis after missing the bus last season while the FEU Lady Tamaraws clinched their fifth straight Final Four appearance.

Later in the day, UST bolstered its bid for the remaining twice-to-beat incentive by demolishing FEU, 25-23, 25-18, 25-23, for 9-4 at third. The Lady Tamaraws fell at fourth with 8-5 with both teams having one assignment left in the elims.

NU coach Norman Miguel said their goal is to end their last two games on a high note.

Princess Robles led the Lady Bulldogs’ offense with 20 points highlighted by 18 kills, while rookie libero Jennifer Nierva took charge of their floor defense by finishing with 30 digs and 27 receptions.

Audrey Paran and Roselyn Doria also shone with 15 and 12 points for NU, which banked on its 10 blocks and 11 service aces. 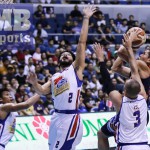 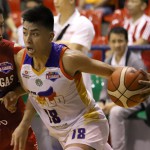