The race for the last three semis berths further intensifies today as Far Eastern University, University of Santo Tomas and University of the Philippines go for vital wins in the UAAP women’s volleyball at The Arena in San Juan City.

Of the three, the Lady Tamaraws seem to have better chances as they battle the already eliminated National University at 2 p.m. while the Lady Maroons hope to settle an old score with the Tigresses.

The Lady Tamaraws and the Tigresses are currently tied for third to fourth places with 7-4 cards while the Lady Maroons tote a 6-5 mark at fifth.

League-leading Ateneo has already booked its place in the Final Four with a 10-1 card while reigning titlist La Salle is standing on solid grounds with an 8-3 mark.

Though NU is already out of it with its 3-8 record, FEU is still wary of the Lady Bulldogs after the latter gave Ateneo a big scare in a four-set defeat.

Heather Guino-o and Jerrili Malabanan are expected to take charge of the Lady Tamaraws’ offense with her hard smashes while libero Ria Duremdes banners their floor defense as FEU also hopes to duplicate their 22-25, 25-19, 25-19, 25-12 opening-day win over NU. 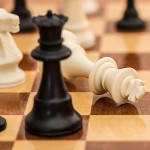