AUGUSTA, United States (AFP) – Newcomers, past winners and a host of green jacket hopefuls made final preparations Sunday at Augusta National on the eve of official practice rounds for the 83rd Masters.

The year’s first major championship begins Thursday at the famed course under the Georgia pines with Rory McIlroy making his 11th Augusta National start and fifth attempt to complete a Career Grand Slam by winning the Masters.

The 29-year-old Northern Ireland star, a four-time major champion, has finished between fourth and 10th in each of the past five years at the Masters, sharing fifth last year, and is a Las Vegas oddsmakers pick to win this time.

If he dons the green jacket next Sunday, McIlroy would become only the sixth player to have won each of the major titles at least once in his career, joining legends Tiger Woods, Jack Nicklaus, Gary Player, Ben Hogan and Gene Sarazen.

“It would be a massive achievement. It would be huge,” McIlroy said during his run-up to Augusta. “But I can’t think about it that way.”

“Right now I’m just soaking it all in,” Wise said. “We can all remember the great moments and great shots just from having watched on TV.

Wise, whose family moved to the United States when he was three, was last year’s US PGA Tour Rookie of the Year. He missed the cut in three prior major starts as he and 16 other newcomers prepare for their Masters debuts.

Watson was on hand for the start and finish of the Augusta National Women’s Amateur on Saturday and was among presenters in Sunday’s Drive, Chip and Putt Championship for youth.

“The buzz is unbelievable,’’ said Australia’s Adam Scott, the 2013 Masters champion. ‘’It gets me excited for next week.’’

The biggest excitement is coming for defending champion Patrick Reed, who is now based out of the Champions Locker Room. 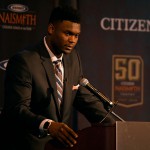