NLEX kept enhancing its quest to make the quarterfinals after routing cellar-dweller Blackwater, 122-101, in the PBA Philippine Cup at the Smart Araneta Coliseum.

Poy Erram dominated his former team for 20 points and 10 rebounds while Philip Paniamogan, Bong Galanza and Kenneth Ighalo provided vital roles to help the Road Warriors move inside the top eight with a 4-5 record.

The Road Warriors’ chances of reaching the quarters have suddenly become better after entering the week reeling from a 121-111 loss to the defending champion San Miguel Beermen.

Coach Yeng Guiao saw his wards respond from that setback with a 91-70 romp of Alaska last Wednesday before coasting past a Blackwater side on the verge of elimination.

Blackwater fell to a league-worst 2-8 record.

“We’ve been hitting our strides,” said Guiao. “We’ve been playing good defense at least the last two games, and it’s been creating a lot of offensive opportunities for us.”

To get into the quarters, NLEX must weather two tough assignments over the next two weeks.

First will be Barangay Ginebra San Miguel on Saturday at the Angeles University Foundation gym in Pampanga before facing Magnolia on April 3 at the Big Dome.

“We still have two games left, but we’re still worried that there’s still a chance for us to miss the quarterfinals,” he said.

Paniamogan produced a career-best 25 points on 8-of-13 shooting, Galanza hit 18 points on 6-of-13 from the field and Ighalo added 17 points.

Blackwater got to within nine, 95-86, in the fourth but threes by the trio prevented NLEX from going on a massive collapse.

Allein Maliksi finished with 20 points, Mike DiGregorio scored 17 and Abu Tratter added 16 points and 12 rebounds after a string of low-scoring outings for the Elite in the loss. 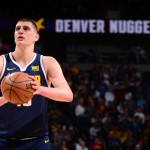