Samahang Basketbol ng Pilipinas (SBP) President Al Panlilio is hopeful that Raymond Almazan will be able to play against Kazakhstan despite suffering a left ankle sprain during a Gilas Pilipinas practice session in preparation for the sixth and last window of FIBA World Cup qualifiers.

“I hope it’s not as bad. It is worst if naka-apak sya ng paa,” said Panlilio prior to departure of the PBA Board of Governors to Doha in support of the Yeng Guiao-mentored national team.

“We need the height and athleticism of Almazan in the game against the taller Kazakhstan,” added the SBP chief who also represents Meralco to the PBA board.

“I have talked to coach Yeng Guiao, and he is confident we can win and make the World Cup. And I believe him,” said Marcial.

Almazan sprained his left ankle on his own while driving to the basket during a practice session Sunday evening in Doha, four days before the crucial games of the national team against Qatar.

The veteran center of Rain or Shine is already wearing an air castboot for precautionary so as not to aggravate the injury, which makes Almazan doubtful for the Qatar game. 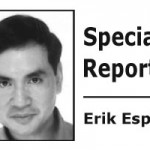