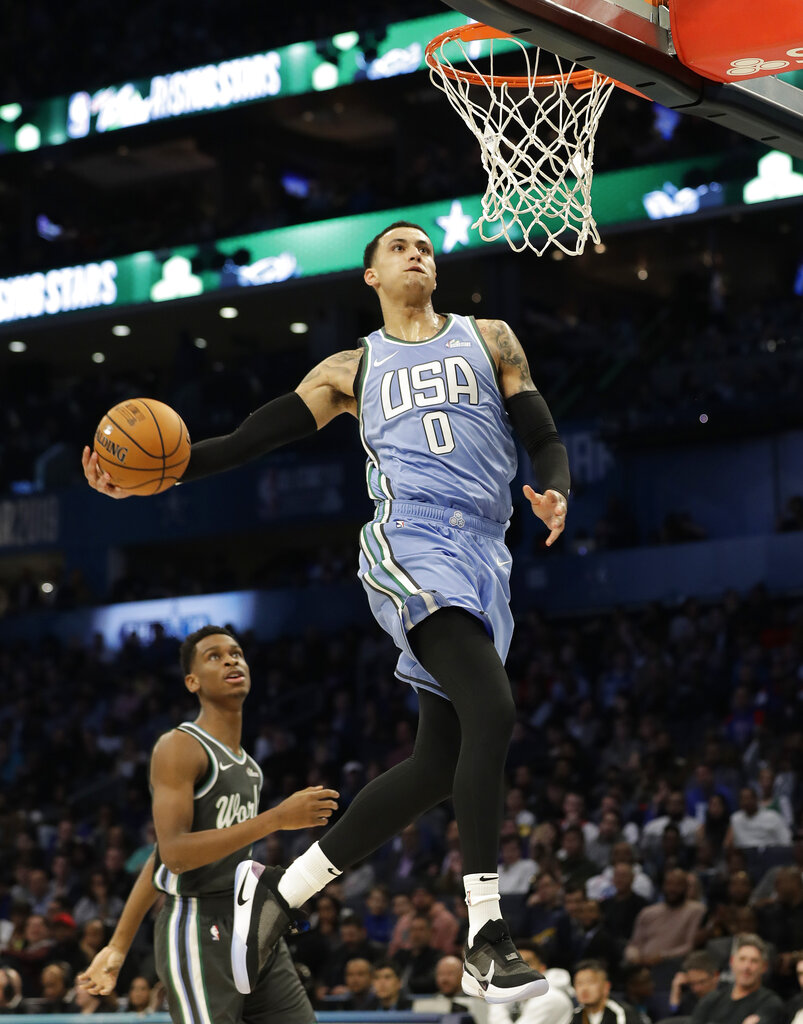 Kyle Kuzma of Team USA goes for a dunk during their game against Team World in the Rising Stars competition of the NBA All-Star Weekend in Charlotte Friday. (AP)

CHARLOTTE, N.C. (AP) – When the likes of the Los Angeles Lakers’ Kyle Kuzma, Philadelphia’s Ben Simmons and Boston’s Jayson Tatum get to the NBA All-Star Game and partake in what’s become the preferred run-and-fun style where defense is discouraged at virtually all costs, this much is clear.

Dunks, layups, 3-pointers and little else. That was the playsheet for the Rising Stars game Friday night, one where Kuzma led all scorers with 35 points on the way to MVP honors and the US team defeated the World squad, 161-144, on the floor that the All-Stars will be using on Sunday night.

Tatum added 30 points for the U.S. The teams combined for 37 3-pointers, 55 dunks and shot a combined 12 free throws.

“Last year, the World team kicked our butts,” Kuzma said. “They came in here and beat us by 30. A lot of us kind of remembered that.”

Tatum added 30 points in the game for first- and second-year players that was known for years as the Rookie Game. Atlanta’s Trae Young finished with 25 points and 10 assists, Sacramento’s De’Aaron Fox had 15 assists and Utah’s Donovan Mitchell added 20 points, nine assists and seven rebounds.

The US squad had a bit more reason to look that way.

Philadelphia’s Ben Simmons led the World team with 28 points on 14 for 17s hooting. Chicago’s Lauri Markkanen had 21 points for the World squad, and Dallas’ Luka Doncic had 13 points and nine assists.

The mood from the outset was predictably light, even including the pregame speeches from US coach Kyrie Irving of the Boston Celtics and World coach Dirk Nowitzki of the Dallas Mavericks.

“I want us to share the ball and not one guy dribble it 20 times and hoist something up – like Luka does with the Mavs,” Nowitzki said, laughing a bit at his own joke.

Doncic talked Phoenix’s DeAndre Ayton out of taking the opening tap for the World team, with the young Mavs star jumping against Fox instead of having either center handle the honors. Young was throwing an alley-oop lob to Atlanta teammate John Collins for a 360-degree dunk in one possession, then crossing over Josh Okogie in almost comical fashion on the next.

“We gotta play some defense,” Mitchell implored teammates at one point.