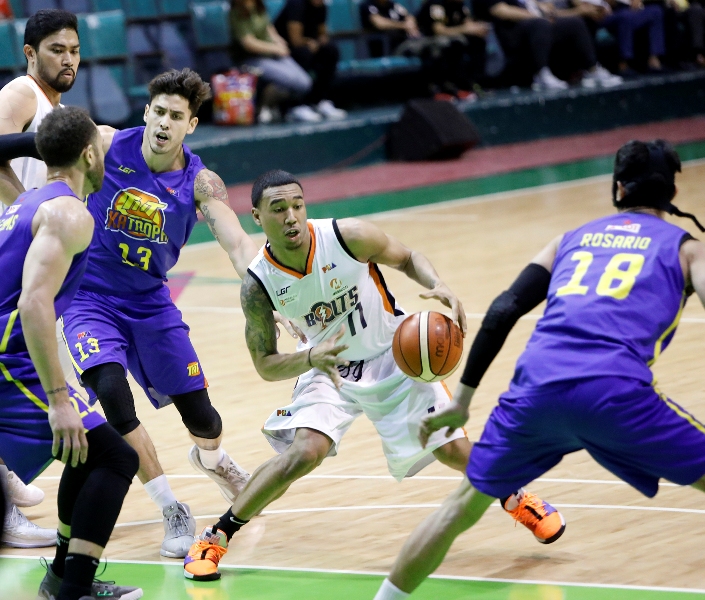 Baser Amer and Chris Newsome combined for 18 points in the third as the Bolts charged back after being down 30-9 at one point in the second and 39-30 at halftime to pick up their second win in four games.

“We just tried to hang in there and get into the halftime break with a manageable deficit, and we were able to do that,” said Meralco coach Norman Black.

Newsome had 20 points, five rebounds and nine assists and Amer, who in the offseason was rumored to be heading to TNT in a three-way trade involving No. 2 overall pick Ray Parks Jr., added 17 points.

The Bolts bounced back after falling 105-93 to the defending champion San Miguel Beermen last Friday at the Ynares Center in Antipolo City.

Things got off a bad start for Meralco as TNT started the contest with 13 straight points that ended on a Roger Pogoy with less than six minutes left in the opening period.

TNT made it 30-9 on a layup by Jayson Castro early in the second.

Meralco slowly inched its way back behind the baskets from Amer, Newsome, Nico Salva and Jared Dillinger and took a 63-58 lead entering the fourth.

The Bolts pounced on the stunned KaTropa in the final canto, with a Newsome triple bringing the margin up to 19 points, 79-60, with 4:50 to go.

Castro finished with 20 points but TNT fell to 2-3 after back-to-back victories over NLEX and San Miguel Beer.

Roger Pogoy added 15 points while Troy Rosario was held to five points on 2-of-7 shooting after going 22 in his first game back from a broken nose.

Former PBA MVP William “Bogs” Adornado is happy these days that he’s back helping a team – Blackwater – in the PBA.

One of the deadliest shooters of his era, Adornado, 67, has been added to the coaching staff of the Blackwater Elite as the team’s shooting mentor.

“It’s really a great feeling that I’m back in the PBA,” said Adornado prior to Blackwater’s game against Rain or Shine.

“Basketball is my life. When I retired, I was looking forward to be part of the coaching staff to certain teams so I could share my expertise and experience to the players,” added Adornado. (With a report from Waylon Galvez)