PRESIDENT Duterte acknowledges the cheers of supporters on the sidelines of the annual assembly of the Provincial Union of Leaders Against Illegality at the Quezon Convention Center in Lucena City, Quezon. (Presidential photo)

President Duterte is determined to provide “a safe and peaceful environment for children” and run after criminal groups amid legislative efforts to bring down the minimum age of criminal liability, Malacañang assured the public Tuesday.

Presidential spokesperson Salvador Panelo said the President has been “unsparing” in his anti-crime efforts, as he supported the bill that would prevent criminals from using children as their accomplices.

“The President remains committed in providing our children a safe and peaceful environment by going after the principals and main actors of crime groups,” he said.

“At the inception of his presidency, PRRD has treated peace and order a priority of the country and has been unsparing in going after the criminals and other menaces in society,” he added.

Panelo said the President believes the present law, which sets the minimum age of criminal liability at 15-years-old, only laid the foundation for the emergence of “a new generation of criminals.”

“When minors are released in as many times as they are arrested, criminality becomes a part of their lives and thereby evolving into being full blown criminals,” he said.

The proposed measure seeking to amend provisions of the Juvenile Justice and Welfare Act of 2006, on the other hand, aims to protect children against criminals who victimize and coerce them to become offenders, according to Panelo.

“The proposed law will deter criminals from using children as their accomplices or in treating them as pawns in committing crimes,” he said, citing statistics that showed a surge of offenses committed by children.

The House Committee on Justice recently approved a bill seeking to lower the age of criminal liability to nine-years-old from 15-years-old. Under the bill, children in conflict with the law will be placed in reformative facilities instead of in regular jails.

Some lawmakers and other concerned groups have expressed concern that nine was too young to be held accountable for crimes, saying the government should instead run after the parents and criminal syndicates for abuse and neglect. (Genalyn D. Kabiling) 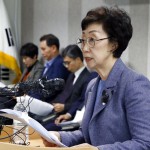