POLICE recovered from a septic tank in Camarines Sur a disassembled .45-caliber pistol believed to have been used in the killing of Ako Bicol partylist representative Rodel Batocabe and his security escort last December 22.

Chief Superintendent Arnel Escobal, director of Bicol Regional Police Office (PRO-5), said the pistol was found inside a septic tank located near the house of Emmanuel Rosello alias “Boboy,” one of the drivers of the getaway motorcycles used by the suspects, in Zone 5, Barangay Santo Nino, Pili, Camarines Sur.

The gun parts were discovered around 3:30 p.m. Thursday, January 10.

According to Escobal, the pistol was used by Rolando Arimando alias “RR” who served as a lookout and back-up gunman in the killing of Batocabe and SPO2 Orlando Diaz, his security escort, during a gift-giving activity in Daraga, Albay. Six others were wounded in the attack.

Arimando allegedly gave the pistol to Rosello for disposal after the hit job, which the latter then threw into a septic tank near their house.

“As per revelation, the gun was used by Arimando. It was given to Boboy,” Escobal said.

Rosello was arrested in Daraga, Albay on January 3 but it was only recently that he confessed to police that he disposed the pistol, prompting the Bicol police and the Criminal Investigation and Detection Group (CIDG) to search for the gun.

Escobal said Rosello made the confession because of the surrender of the other members of the hit squad.

The recovered gun parts were subjected to laboratory examinations to determine if it would match the recovered caliber .45 bullet shells in the crime scene, Escobal said.

Earlier, PNP chief Director General Oscar Albayalde revealed that some of the bullet shells found in the crime scene matched the licensed gun used by Henry Yuson, the main gunman, according to the results of the ballistic examination.

Yuson, along with the other members of the six-men hit squad who either surrendered to or were arrested by the police, all pointed to Daraga town Mayor Carlwyn Baldo as the mastermind in the assassination plan.

“We are confident that Yuson and the other suspects are telling the truth. This will further boost our case against them,” Albayalde said.

Double murder and multiple frustrated murder charges were filed against the seven suspects. (Martin A. Sadongdong) 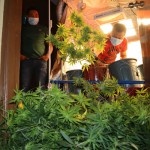