The men of the Philippine Golf Tour and PGT Asia set out for back-to-back duels at the demanding Luisita Golf and Country Club in Tarlac beginning tomorrow, all ready and raring to slug it out in two rich tournaments following a month-long break on the two circuits.

Jhonnel Ababa, the last winner at ICTSI Club Filipino de Cebu last month, heads the 80-player field in the P4 million ICTSI Luisita Invitational where five of the nine leg titlists go all out to match Jobim Carlos’ two-title feat in the final leg of this year’s 10-stage PGT put up by ICTSI.

But aside from the leg winners, the field also features veteran campaigners and upcoming stars due for big win and out to avert a winless season, including former three-time PGT Order of Merit winner Tony Lascuña and reigning OOM champion Clyde Mondilla.

Meanwhile, the CAT (Central Azucarera de Tarlac) Open will be played on Oct. 23-26 with the $100,000 event serving as the sixth leg of the second season of PGA Asia featuring a tough international cast. 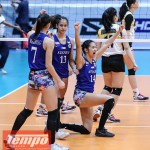