The match between the two stars will take place at Jeddah’s King Abdullah Sports City on Dec. 22.

‘‘Thanks for the invitation and looking forward to playing and visiting for the first time,’’ Nadal said on Twitter.

Nadal, the reigning French Open champion, has 17 Grand Slam titles to his name. 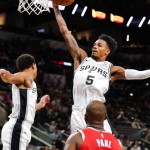